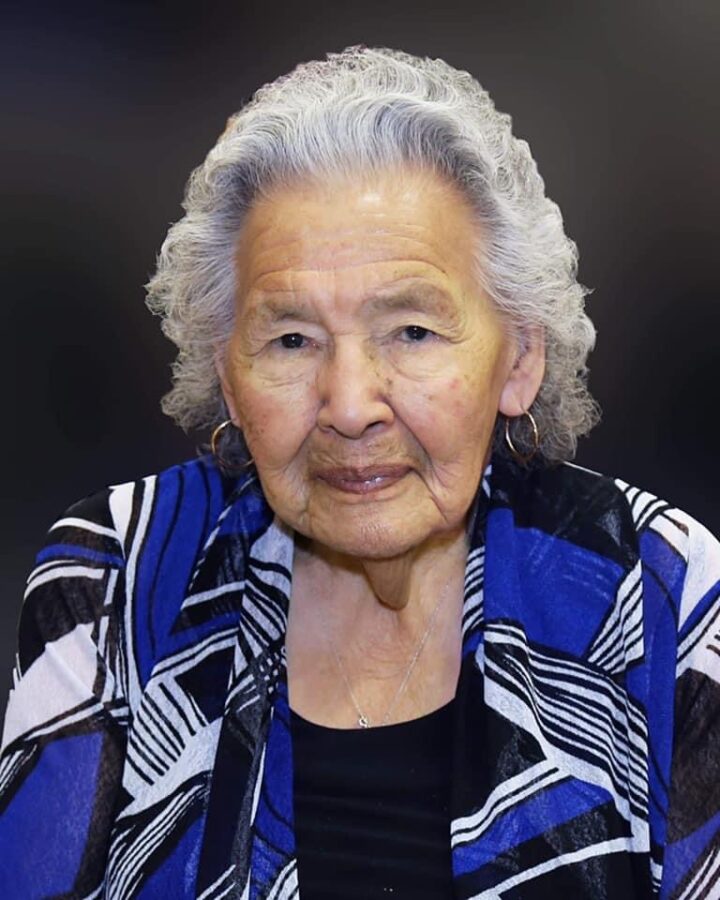 Elaine M. Cantrell went to be with the Lord on Sunday, September 5, 2021 at the Trinity Hospital in Wolf Point. Elaine was a beautiful, strong Christian lady who dedicated her life to the Lord and was happy to see her family come to the Lord.

Grampa Fred and Grama Louise lived in Riverside, until grama Elaine and her little sister May were getting old enough to go to school. They loaded up their covered wagon and her dad hitch up his team of horses, and they took 3 days to move to Wolf Point; where she lived out her full and graceful life.

She said when they left Riverside, they couldn’t take all their extra belongings, so she took her sister May’s doll and hid it under the flour so she would have a doll.

She said she loved her life with her mom and daddy. Her dad worked mostly farming, but he would translate French and English for others to earn money for the family. She said one of her best memories was when she was growing up and her dad couldn’t waste his bullets, so he would fish, snare, and trap some wild game. They grew up during the depression and war ration times. She always remembered her mom skinning the gophers to eat and making her dolls fur coats out of their hides.

Grama shared many good memories of her life growing up. She said she loved travelling on the skidoo train and going to Fort Belknap to stay with her family there. When she was younger, she said her family still believed in the old ways, and she was promised to her husband, Arnold Littlehead Sr., they were married. Her father Fred White Hawk and her husband’s father Benjiman Littlehead signed for them, since they were still underage. From their marriage they had nine children, Evelyn, Arnold, David, Benjiman, Gordon (deceased at birth) Gordon Sr., Alvin, Irene (deceased at birth), and Gerald.

Their marriage ended when Arnold passed away due to complications after surgery at 36 years old. He was a Tribal Police officer; she was a homemaker. When she was widowed, she started working at the Sherman Hotel and also took in laundry at night. She was busy and talked fondly of the hard times she had and how much she loved her kids for helping.

She said Evelyn and Dave would use the wagon to take laundry and deliver it for her. They also had to use the wagon to get fuel for their heater. Through the many stories she told, she spoke fondly and laughted after. No matter what she always thanked the Lord for everything and everyone in her life.

She later married Rusty Cantrell and from their marriage were born Curtis and the twins, Llewelyn and Vernon, who died shortly after birth.

She was married to Joe Bauer which was a fun time. She worked at Trinity Hospital with her great friend, Darlene Campbell, who she always remembered, she later worked at Highway market, several different places here in town and Headstart with Flora BlackTail and later she worked for the Lord at the Lord’s Table with her great friend and sister in the Lord, Margie Lindsay.

Elaine talked about her White Hawk family she was preceded in death by her father, Fred White Hawk; aunts who helped raise the two girls, Mary Shyface and Marianne Comeslast; grandfather, White Hawk and his wife, Red Star Woman; brothers and sisters, Lillian White Hawk, Vina Shields Roberts, Charles Shields, Joseph Shields Sr., Vernon Shields, Nelson Shields, and May Dumont. She was very close to her husband’s family who also precede her in death, she had  lifelong memories with her sisters-in-law, Delphine LeMay, Amanda BigHorn, Romaine Fire Moon, who were close to her throughout their lives, along with her mother-in-law, Evangeline (Little Gramma) Cloud Little Head and Benjimin Littlehead.

Condolences for the family may be left using the form below.

Add your thoughts and memories.